The American Revolution is filled with events that were completely unexpected, even shocking, but predictable when we take a closer look at what was happening in England and America. They were the kind of events that no one foresaw, but that changed the course of events to come. They often left one side or the other struggling to reorient to a new reality. Let’s take a look at two that you might not have learned about: the Gaspee Affair and the Beulah Incident. 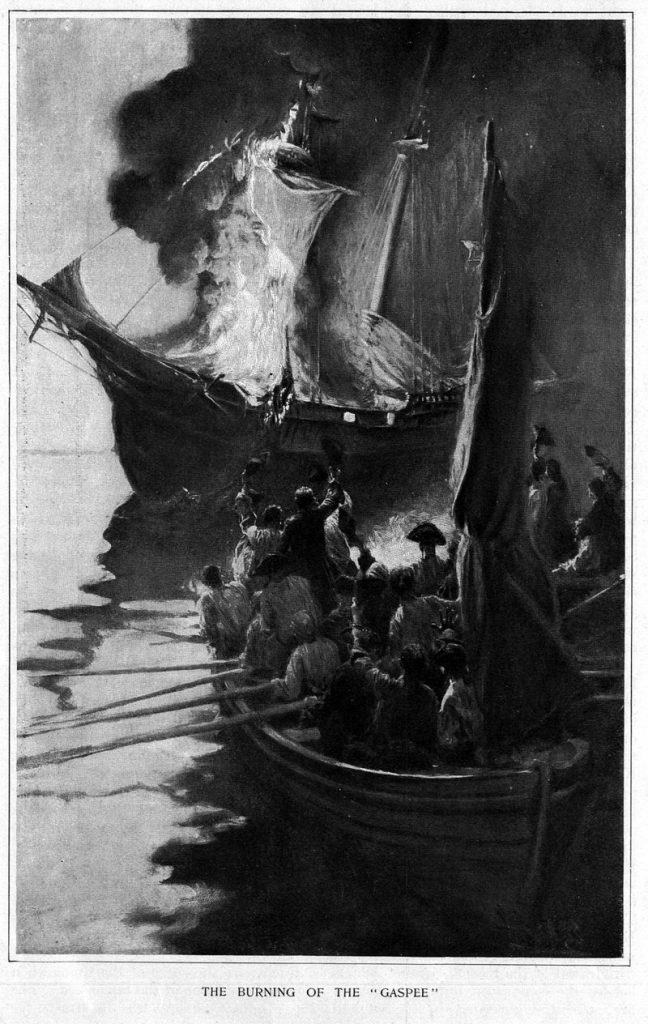 In the early 1770s, Rhode Island was one of the most radically independent of the American colonies. Stephen Hopkins, (elected in 1755 as Governor, 1751 as Chief Justice of the Rhode Island Supreme Court, and later a signer of the Declaration of Independence), was an outspoken proponent of liberty and rebellion against the crown when the crown’s decisions interfered with the well being of Rhode Island. According to Hopkins, every action taken in the colonies by the Parliament required the consent of the people. (1) This lead to a growing conflict between Rhode Island and England.

Hostilities between the colony and England were steadily increasing over England’s attempt to enforce customs tax collections, which Hopkins considered a violation of Rhode Island law. A large part of the Northern colonies’ economies was based on import/export trade with the Caribbean Islands. As goods entered and exited the colonial ports a customs tax, or duty, was required to be paid to England. Ship captains throughout the region got around the taxes by sometimes bribing the customs agent or unloading a part of their cargo (smuggling) along the coast to avoid the fees altogether.

Lieutenant William Dudingston, commander of the HMS Gaspee, had a notorious reputation as a strict enforcer of customs laws along the Northeast Coast. The Gaspee had numerous run-ins with colonial ships including the Rhode Island ship Fortune, which was seized by Dudingston for smuggling molasses, among other items. (Part of the cargo was owned by Nathaniel Greene, who later became a Major General in the Continental Army.) After a year of Dudingston’s strict enforcement, the ship captains of Providence decided to turn the tables on him.

On June 9th, the Gaspee set out in pursuit of a colonial ship called Hannah. The captain of Hannah, who knew the coastal waters well, lead the Gaspee through narrow, shallow water where it ran aground. The Hannah sailed off, leaving the Gaspee stranded. In the middle of the night, out of the darkness, the men of the Gaspee heard an American Voice shout “God damn your blood, we have you now!” American raiders boarded the Gaspee, violently took the ship and looted it. They removed the captain and crew in boats and brought them ashore to safety. But as the Englishmen looked back toward the Gaspee, they saw the ship explode into flames.

The Gaspee Affair stunned the Parliament. But should it have? Looking back, we can see evidence of growing anger on the part of the colonies against enforcement of the customs duties. We can also take into consideration the violent opposition to the Stamp Act in 1765 and the subsequent Quartering Act. The Boston Massacre took place in March 1770 and should also have served as a warning to England. But at the time, the idea that colonial ship captains would be skilled enough, brave enough, and crafty enough to overcome and destroy a British ship was beyond imagination until it happened.

In England, they thought it was a one-time affair, unlikely to be repeated. Then, in 1775, in New York City, there was the Beulah Incident.

On February 1, 1775, the colonies entered into a non-importation/non-exportation agreement. Under the agreement, they would not engage in any trade with England. The first of these agreements occurred in 1765 in response to the Stamp Act. The resulting economic distress in England lead to the repeal of the act.

The Murrays were a wealthy family of merchants. They owned the wharf at the end of Wall Street, then called Murray’s Wharf. The area we know today as Murray Hill on the East Side of Manhattan was their estate, Inclenberg. Robert and his brother John were expecting the arrival of one of their ships, Beulah, named for Robert’s second oldest daughter, to arrive in New York. The Beulah carried two tons of cargo including bolts of fabric, bales of paper and other manufactured goods. The Committee of Inspection prevented the Beulah from docking. Murray argued that he should be allowed to unload the cargo since he had already paid for it and loaded it before the agreement went into effect.. His request was denied. The committee sent a pilot boat to escort the Beulah out of New York Harbor.

The Beulah reentered the harbor a short time later and successfully outmaneuvered the pilot boat, losing it somewhere around Sandy Hook. The ship rendezvoused with another vessel just off the coast of Staten Island, another Murray ship, and the crew moved the cargo to the new boat. That ship carried the contraband to Elizabeth, NJ where the crew placed it into storage.

Unfortunately for Murray, the Sons of Liberty were on the lookout for the Beulah and tracked down the cargo. The crews of his ships were interrogated, and Murray was found to violate the non-importation agreement. He was ordered to reship his merchandise, issue a formal apology, and make a substantial financial contribution for repairs to a local hospital. Alexander McDougall, leader of the Sons of Liberty, argued for the banishment of the family from New York. Robert Murray’s actions had damaged the reputation of the city and threatened the unity of the colonies against England.

Robert’s wife, Mary, wrote a letter to McDougall. In it, she pleaded with him not to banish her family. To do so, she said, would make homeless, wandering paupers of “innocent wives and helpless children.” Her reputation as a friend of the Sons of Liberty and patriot saved her family. They placed an ad in the local papers apologizing for their actions. 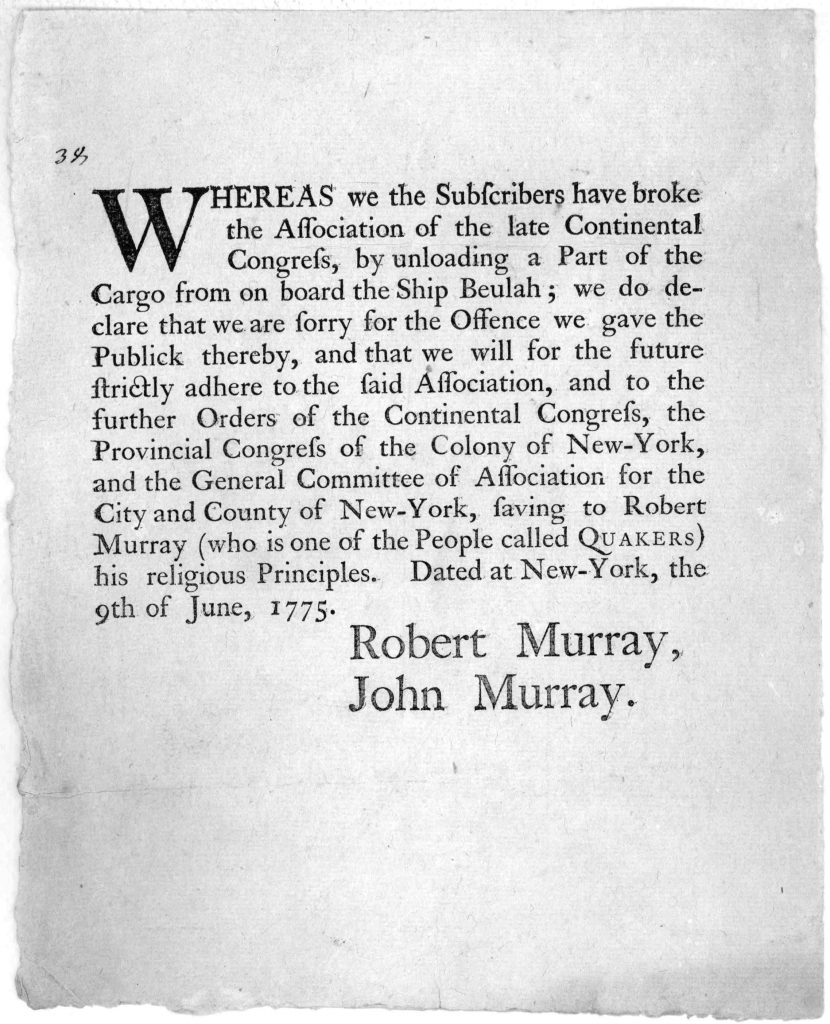 The Beulah incident illustrates the growing power of the Sons of Liberty in New York. They enjoyed the support of the working people of the city: farmers, artisans, dock workers, printers, ship captains, and even some influential lawyers. About six weeks after the incident the Sons of Liberty forced Governor Tryon and Mayor Matthews off of the island. They lived on a ship in the harbor for the next year and a half. It was anchored where the Statue of Liberty is today.

For those who’ve been on my Revolutionary War Era Tour, if Mary Murray sounds familiar to you well, she is the one who delayed the English during the battle of Kips Bay in September 1776, by offering the officers afternoon tea. 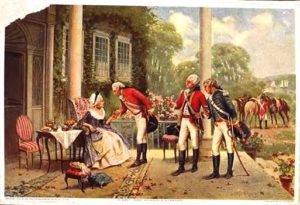