You are here: Home | Battle of New York | Bushnell Turtle

The 1st Submarine – The Bushnell Turtle

When I talk about the battle of New York on the Revolutionary War Tour I try to find some stories to lighten up the narrative. Here’s one I don’t have time to include on the tour but is one of my favorites. It’s the story of the Bushnell Turtle, the first submarine ever used and the brave, or crazy, men who built and piloted it. 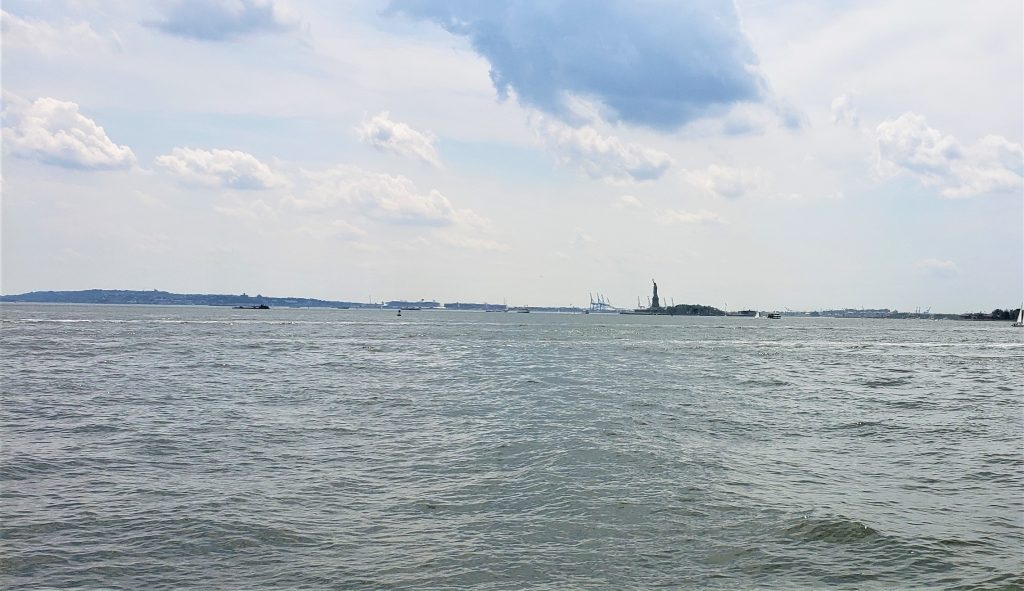 Imagine warships filling all of this! Photo by Karen Q.

Once in a while, I like to walk over to Battery Park after a tour and look out over the Upper Harbor. I try to imagine what it must have looked like during the Summer of 1776 when Royal Navy ships stretched from Brooklyn to New Jersey and from Manhattan to Staten Island. A resident of Brooklyn observed that it looked like he could walk from Brooklyn (left on the picture above) right across to New Jersey (right on the picture above) across the decks of the ships without touching the water. A person on Manhattan said that at night it looked like all of London was afloat in the harbor.

By mid Summer of 1776 things were looking pretty dismal for General Washington and his inexperienced army. About twenty thousand strong, with little training, experience, supplies or discipline, the newly formed Continental Army did it’s best to fortify Manhattan Island. General William Howe sat on Staten Island in the Upper Harbor while the Royal Navy surrounded the city. An estimated five hundred ships under the command of Admiral Richard Howe filled the surrounding waterways.

In total, British forces were estimated to be forty-two thousand well trained, well-armed professional soldiers (including Hessian mercenaries). It was starting to look more and more like Washington, and the Americans would never get out of New York alive. And then David Bushnell arrived. 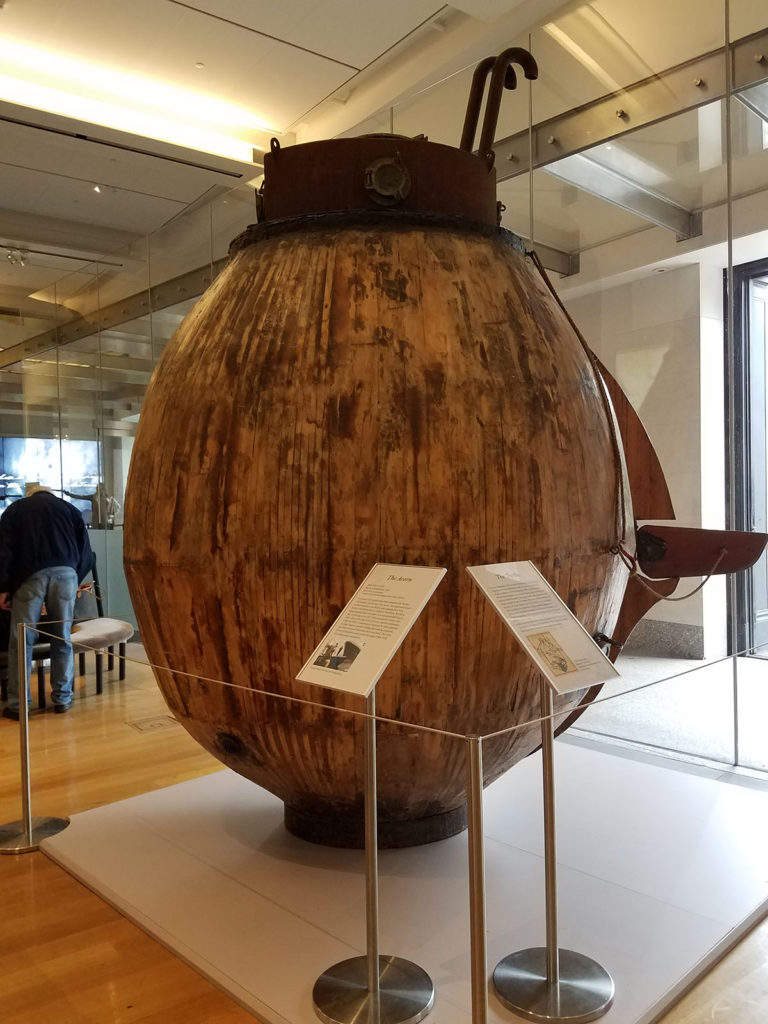 David Bushnell (1740- 1824) was an inventor from Westbrook, CT and that sweltering Summer in New York he had just the idea for battling the Royal Navy: a submarine!

Bushnell’s design looked like a wooden egg and incorporated a few innovations. It was the first submersible vehicle to use water as ballast to raise and lower the vessel; it used a propeller to move through the water, a filament to light the inside and had a snorkel breathing device. Plus it carried a weapon, a mine that could be attached to the hull of an enemy ship.

Two pedals were used to operate the turtle. One turned the propeller and the other the rudder. A lighted compass showed the pilot the direction in which he was traveling. There was even a depth meter, a twelve-inch long glass tube that contained a cork that moved up and down with the vessel.

The US Navy describes it this way:  “It embodied the four basic requirements for a successful military submarine: the ability to submerge; the ability to maneuver under water; the ability to maintain an adequate air supply to support the operator of the craft; and the ability to carry out effective offensive operations against an enemy surface vessel.” (1)

Bushnell’s plan? Use it to blow a hole in the hull of the Royal Navy’s flagship, home of Admiral Richard Howe, the HMS Eagle.

Sargent Ezra Lee, the pilot, gave a detailed account of his adventure, which is published in The American Journal of Science and Arts, November 1820, Volume II. You can download it free at the link.

After a few practices in Long Island Sound, Sgt. Lee was ready for his mission.

At 11:00 pm on a serene night in August, a party of whale boats towed the Turtle as close to the fleet as possible without being seen. Lee climbed into the Turtle, the boats set it free, and he was on his own. He found himself amid a strong tide that made him drift too far past his target. Eventually, he was able to get the Turtle turned around and made his way toward the HMS Eagle. It took him TWO and a HALF HOURS of hard cranking at the pedal to get to the stern of the ship. The sun was coming up, and by the light of the moon, he was able to see people on board and hear their conversation. Lee made sure the top was tightly closed and sealed and descended under the ship’s bottom.

Lee set about attaching one of the barrels to the ship. He aligned the Turtle and turned the handle that would screw the barrel into the ship. But it didn’t work! No matter how much pressure he applied, the barrel would not attach, and all of his attempts failed. Lee paddled over to a different spot and tried again, and this time the Turtle bobbed up into the water right next to the ship where it was visible. Lee quickly submerged and, worried that he would be discovered, made his way away from the gathered warships.

Eventually, Lee made it to Governor’s Island and, finding the compass was not working, maneuvered the Turtle to the surface where he could figure out where he was. He popped out of the top to have a look around and was spotted by British soldiers. Within a few minutes, several hundred were on the beach trying to figure out what the strange thing was bobbing in the water with a man inside! A few soldiers got on a barge and rowed out toward him.

Lee, thinking it was the end for him, released the powder magazine, thinking they would pick it up and get blown to bits with it. As the fuse burned, he paddled away as fast as he could go. The soldiers, after getting a better look at the Turtle, declared it to be a “cruel Yankee trick” and turned back to Governor’s Island. Meanwhile, the barrel, it’s fuse still burning, floated along to the entrance of the East River where it exploded, sending a giant column of water and wood pieces high into the air! General Israel Putnam and his men watched from the Brooklyn shore and cheered.

A Lesson for the British

The Turtle didn’t destroy any ships, but it was a lesson for the British, who continually underestimated the determination of Americans.  Next time we’ll look at the Battle of Long Island and how the full force and fury of the British Empire still did not make them surrender.