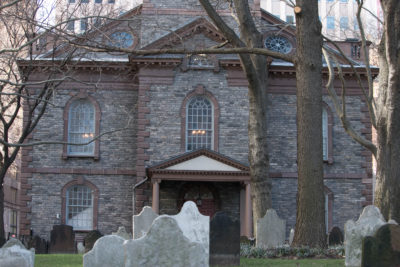 Symbols of Freedom in Early NYC

A walk through the historic streets of Lower Manhattan uncovers many symbols illustrating the early history of the city and the celebration of freedom after the Revolutionary War. Some are in plain sight and others a little harder to find. Some are right in front of us but we usually don’t know what they mean. Let’s see what we can find in St. Paul’s Chapel artwork.

Every tour I lead visits St. Paul’s Chapel. Standing intact since 1766 it’s been a constant presence since before the Revolutionary War. The chapel is filled with symbols of hope, justice, freedom and the promise of a better life after the American Revolution.

On the outside of the church, facing Broadway, is the Montgomery Monument. It was commissioned in 1776 by the Continental Congress, at the request of Benjamin Franklin, to honor Major General Richard Montgomery. Montgomery was killed in the Battle of Quebec on December 31, 1775. 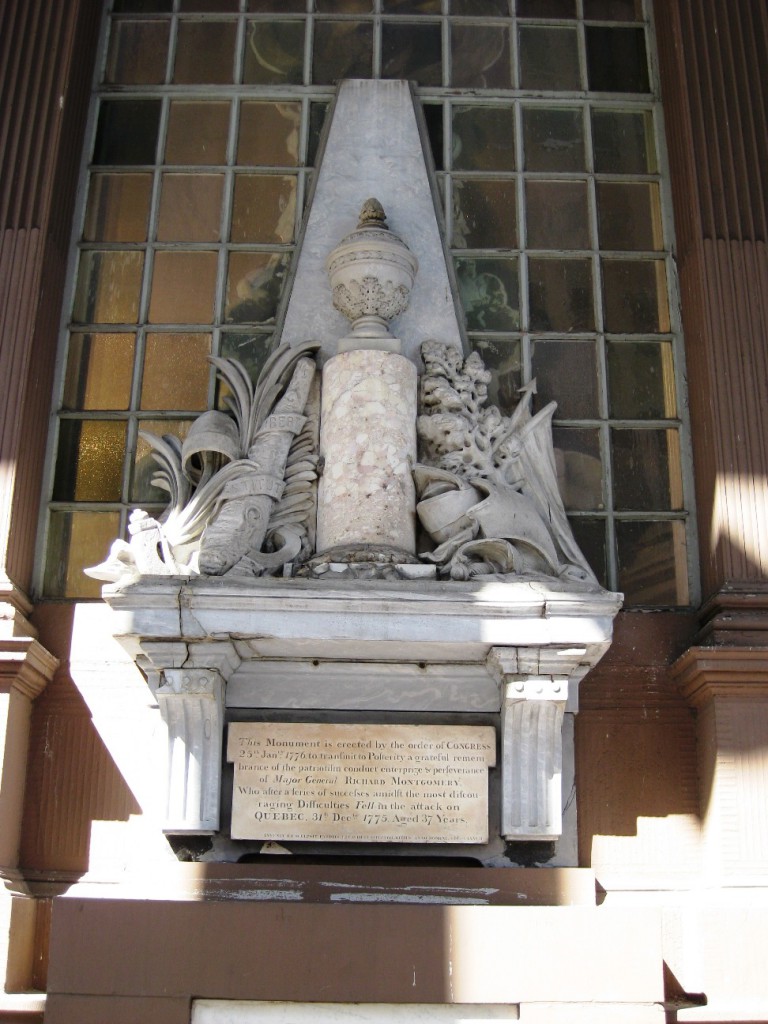 The monument was made in Paris by Jean Jacques Caffiéri in 1777. It was installed in the church in 1787. On the left is a group of palms, symbolizing martyrdom, with a phrygian cap, a symbol of freedom, and a club with a ribbon inscribed with “libertas”. On the right are traditional military emblems: a knight’s helmet and arrows. In the center is a column with an urn.

Beneath the monument is an inscription dedicated to Montgomery.

Walking into the church you immediately notice the altar, designed by Pierre L’Enfant and installed in 1787. L’Enfant was from Paris. He was an artist, engineer and officer in the American Army during the Revolutionary War. 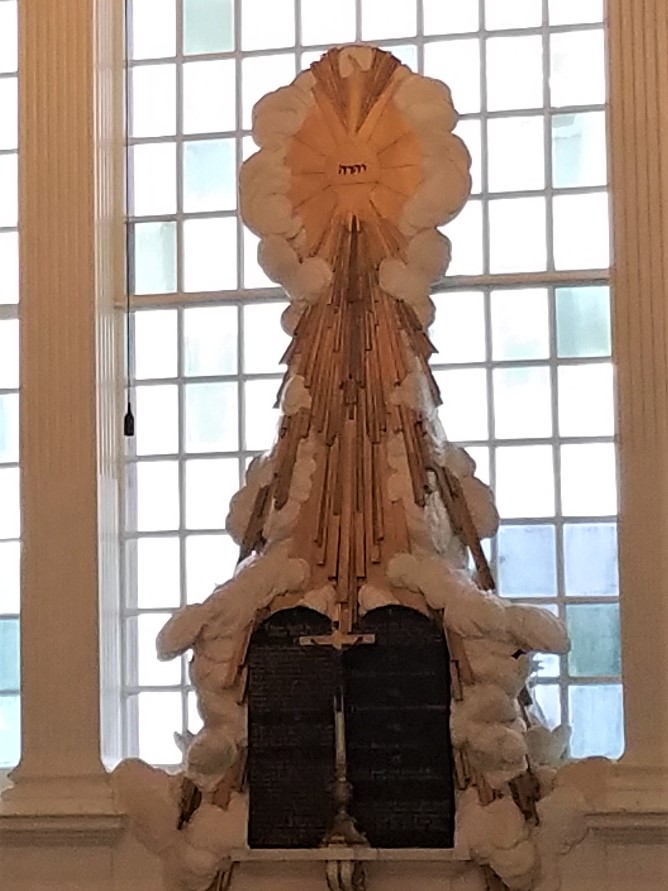 The design is called “Glory” and represents Moses receiving the Ten Commandments from God atop Mount Sinai. The rays of light, known as a “glory”, symbolize God’s power. In the center of the glory is a triangle and within the triangle are the Hebrew letters YHVY, the unspoken name of God.

It’s likely that L’Enfant was inspired by European Christian iconography of the time. The picture below is from the book, Iconologia by Cesare Ripa, printed in 1620. (A wonderful book filled with religious depictions.) You can see the same symbol in the sky above St. Augustine, representing God.

L’Enfant would have been familiar with this book from his schooling in Paris and would have seen altars in France that incorporated the same symbols. 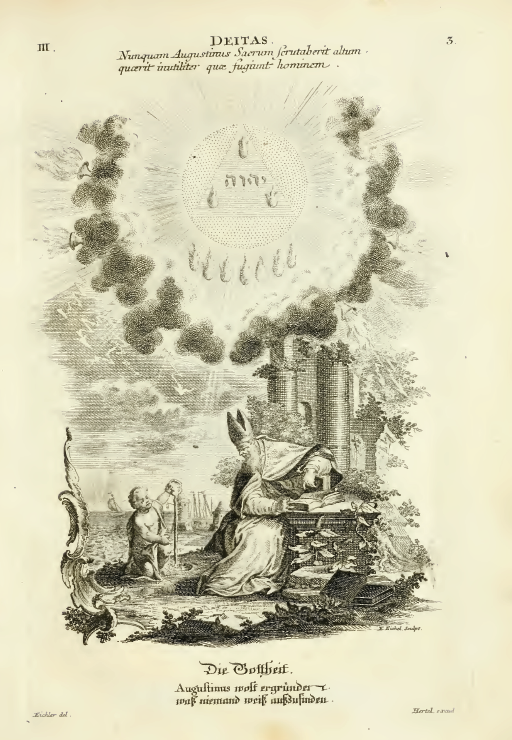 What Does It Mean?

YHVH represents the Hebrew name of God and is also known as the tetragrammaton. (Greek for 4 letters). It’s placed inside of a pythagoras tetractys, a triangle that also represents God. Those are placed within the glory, also a symbol of God.

Interestingly, we see the same symbol on this Freemason banner from early NYC. Freemasonry incorporated many of these old religious symbols. 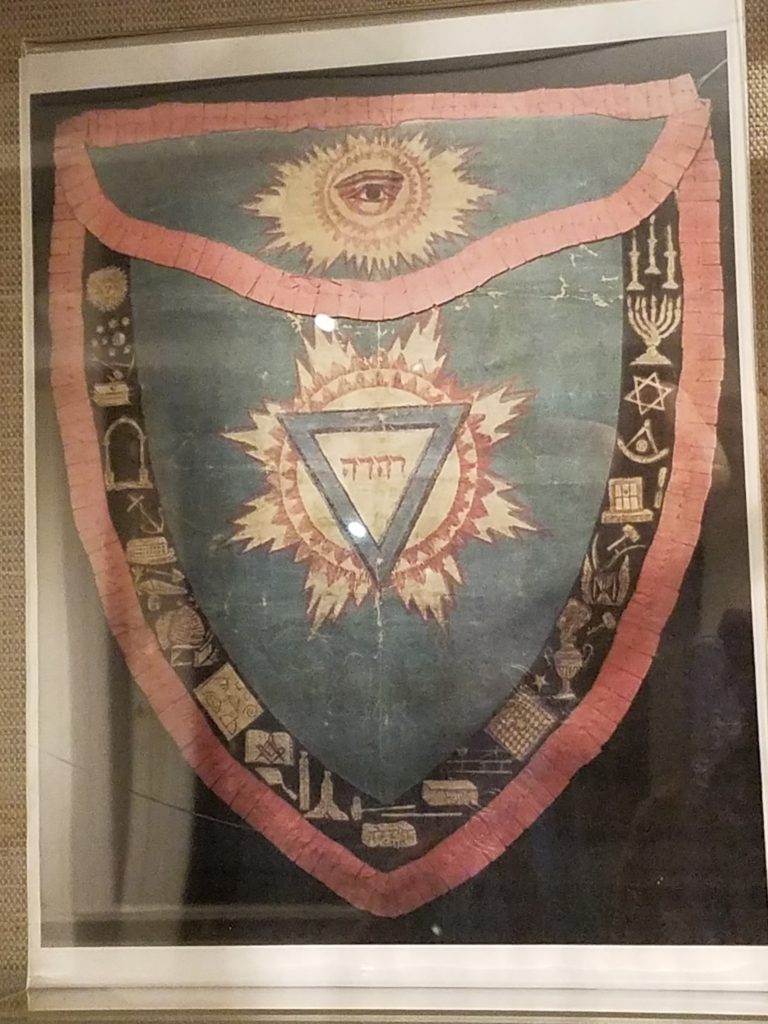 On the Southern facing wall is a painting, commissioned by the church in 1784, of the Arms of the State of New York. 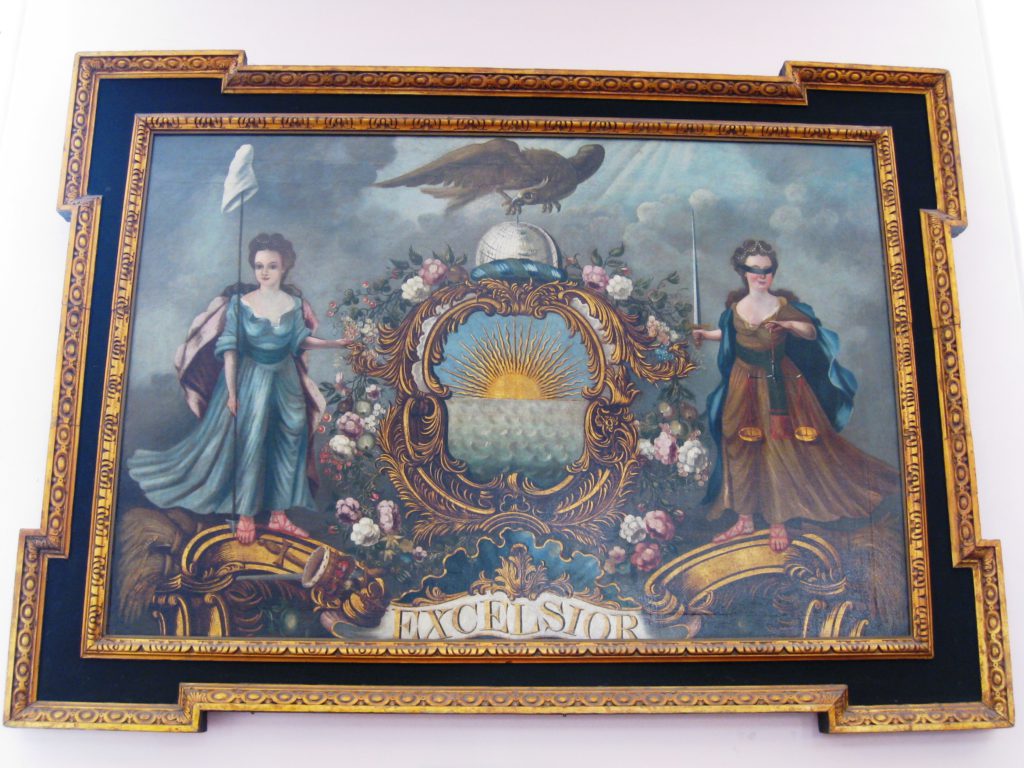 At the very top of the painting are rays of light, a glory, breaking through the dark clouds. Beneath them, the American eagle, strong and capable. Beneath the eagle is a frame and within it the sun is rising over the Atlantic Ocean. This symbolizes the importance of maritime trade to the state. Today’s version of the NY State flag shows two ships sailing on the Hudson River in tribute the importance of that river in our financial success.

On the left side of the painting is a woman representing freedom. In her right hand is a spear with the point down, in the passive position, and a phrygian cap sits atop the end of the spear. The cap is an ancient symbol of freedom from slavery or oppression. Beneath her feet is a dagger and at the end of the dagger is the King’s crown, on its side. The cap of freedom is above her head and the crown of oppression is beneath her feet. The battle is over and liberty has won!

On the right side is a woman representing justice. Her sword us unsheathed and pointed upwards, in the aggressive position, ready for battle. The scales she carries are balanced and she is blindfolded. Justice in the new land will apply equally to all and we are prepared to fight for it.

At the bottom of the painting is the word “Excelsior”, our New York State motto: “Ever Upward”. 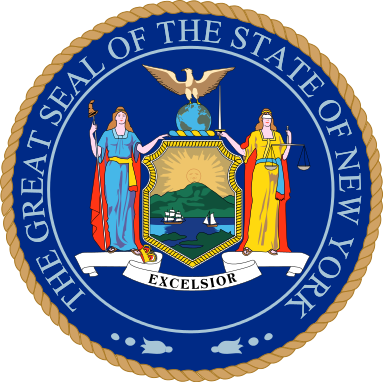 Directly across from the New York State arms, on the Northern facing wall, is a painting of the Great Seal of the United States of America. It was also commissioned in 1784. 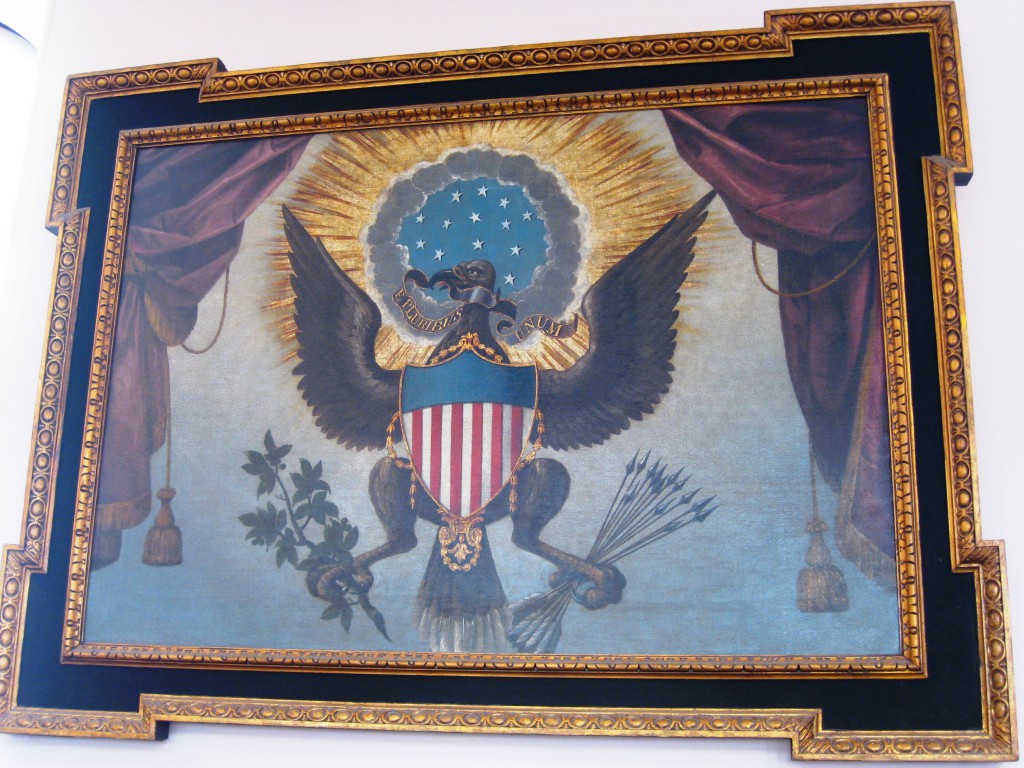 Great Seal of the United States of America, 1784

Right away the giant glory jumps out at us! Within it are thirteen stars, representing the thirteen colonies: the colonies have been brought into existence by God’s will. In front of the glory is an eagle with a banner in its beak bearing the motto “E Pluribus Unum” our national motto: Out of Many, One. On the eagle’s right side the eagle carries an olive branch, the symbol of peace. On it’s left side are thirteen arrows, symbols of war. This tells us the new nation looks toward the path of peace but reserves the right to war, if necessary. On the eagle’s chest is a crest, representing the new American republic. Thirteen stripes are the thirteen states and blue above them is the congress. Meaning: the congress exists according to the will of the states, which are united into one republic.

Over the years the Great Seal has changed and below is the current version, designed by Tiffany & Co., NYC, in 1885.

In St. Paul’s Chapel we see all of these symbols of hope, justice and freedom. The ideals of the generation that fought the American Revolution and came together to write and ratify the Constitution are commemorated in these beautiful works of art. There are many more in the neighborhood and I will be discussing them in future posts.

If you’d like to read more about the imagery found at St. Paul’s, see “By the Light of Providence: The Glory Altarpiece at St. Paul’s Chapel, New York City” by Michael Paul Driskel.

Until then, thank-you for reading!