To The Betrayed Inhabitants

To The Betrayed Inhabitants of the City and Colony of New York December 16, 1769, this anonymous broadside appeared throughout the NYC area. It condemned the colonial assembly and the governor for breaking American unity against the Quartering Act. The act required the colonies pay for British troops and forced residents to house them in.. read more →

Tuesday, December 4, 1783 – George Washington says goodbye to his assembled officers at Fraunces Tavern in NYC. The best, I think, description of Washington’s Farewell comes from The Memoir of Colonel Benjamin Tallmadge. So the rest of this post will be entirely his words. “We had been assembled but a few moments, when His.. read more → 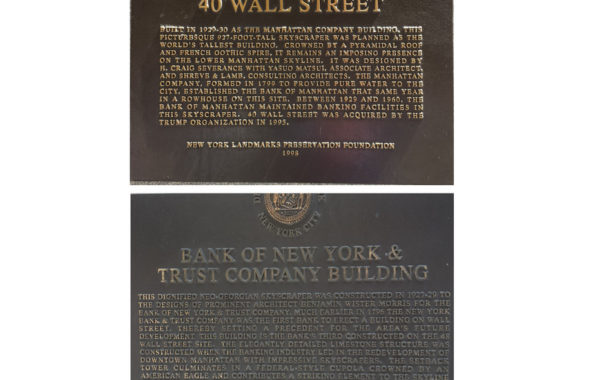 Dueling Banks BONY vs Manhattan Trust Co. Within a block of each other on Wall Street are the BONY (Bank of New York) and Manhattan Trust Buildings. Both are New York City Landmarks and proudly display their plaques. Tourists stop to snap pictures but what many don’t realize is that the buildings are monuments to.. read more →

Political Cartoons of the American Revolution I love political cartoons! But I have to admit that the first time I saw them from the Revolutionary War Era I didn’t have any idea what they meant. Once I started to figure them out I realized they were brilliant and started a collection. Here are some of.. read more →