You are here: Home | Blog | Aaron and Theodosia Burr

An Unusual Relationship: Aaron Burr and his Daughter Theodosia

Many of you know that I am writing a biography of Aaron Burr’s daughter Theodosia Burr Alston. The book is for a young adult audience and will be a scholastic book for use in school libraries and classes. It’s a great opportunity to get young readers interested in History through the story of a very unusual teenager during our founding era. It is scheduled for publication next Spring, 2020.

I thought I’d give you a small preview of what I’m working on. I hope you enjoy it! 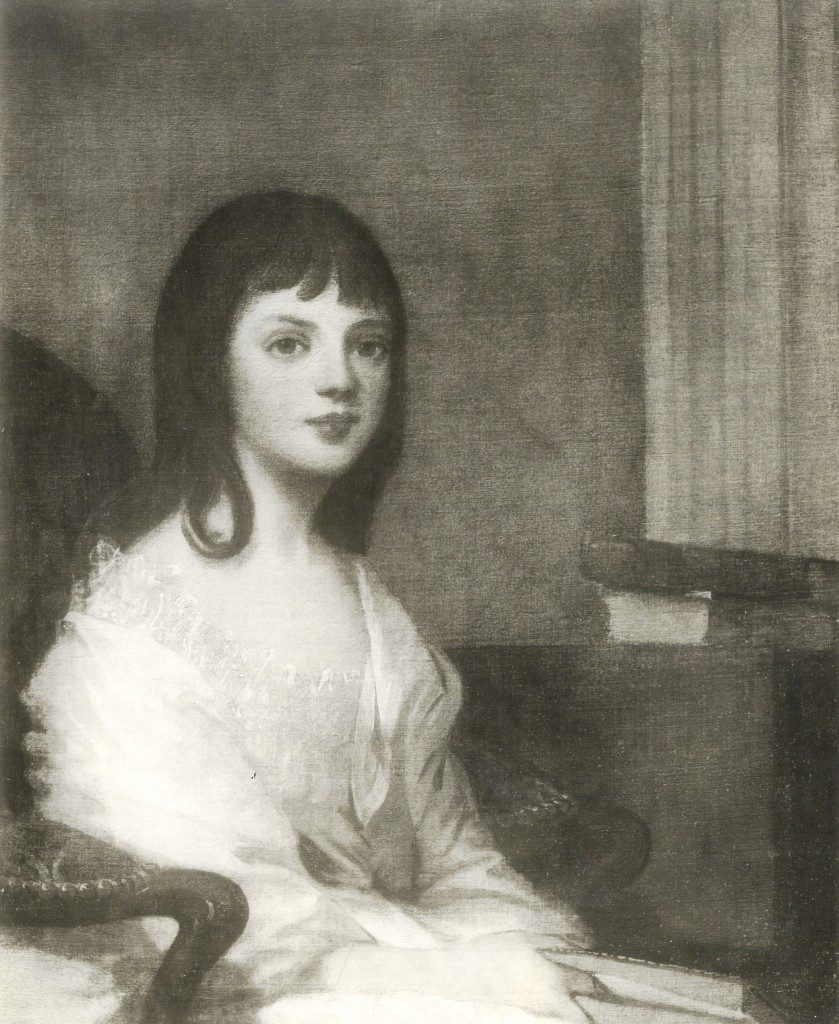 Aaron Burr had only one child, Theodosia, born June 21, 1783, in Albany, NY.  She was named for her mother, Theodosia Bartow Prevost Burr who was, in turn, named for her father, Theodosius Bartow. The name means “gift of God”.  In 1784 the Burrs relocated to New York City where Aaron began his law career.

Theodosia’s parents were both well educated and set about teaching their daughter. They were both radical followers of the English author Mary Wollstonecraft, and her book “A Vindication of the Rights of Woman” and believed girls should be educated equally to boys. Aaron considered his wife to be his intellectual equal, a view very out of place for the 18th century!  When they realized their daughter was a gifted child or prodigy, they were determined to provide the best education possible for her.

Theodosia’s mother was her first educator, teaching her to read and write when she was very young. At three years old she wrote her first letter to her father, and at eight she translated part of the Declaration of Independence into French. At ten she began studying Latin and Greek classics and math!

Here’s a portion of a letter she wrote to her stepbrother discussing reading Virgil (ancient Roman poet) and Terence (Roman playwright). She is eleven years old! 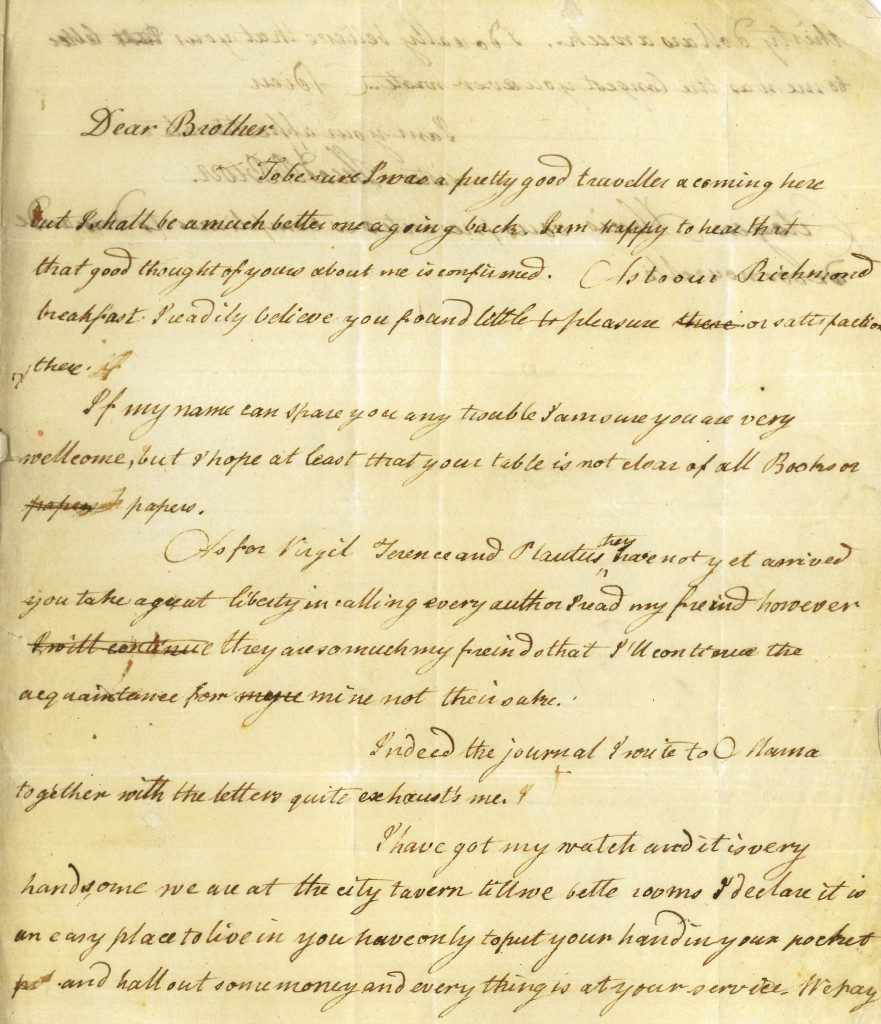 She closes the letter with a paragraph in French!

Most of what we know about Theodosia’s relationship with her father is through their letters. Aaron served in the NY Assembly, then as NY Attorney General in Albany and then as a US Senator in Philadelphia. He wrote to his daughter and his wife (until her death in 1794) daily and they to him.

When I first read their letters I was stunned to find something very different from what I’d always heard about them. Most books portray Burr as an unloving, judgemental father, correcting his daughter’s grammar, the content of the letters and their lack of frequency. And that’s true; he does do that. But not because he is unloving. He does it because he is training her for something more, something better, something beyond anything an American woman has ever achieved – intellectual greatness!

For instance, he criticizes her confusion between the use of “then” and “than” but assures her she will understand them better when she masters Latin. Aaron sends her an outline of what her daily journal should contain, then praises her later when she achieves that goal. Burr is teaching her discipline, something he knows she will need to master more difficult topics in the future.

When Theodosia’s mother dies (she had stomach cancer) Aaron places her in the care of a Parisian governess where she will learn fluent French and French manners, the language of diplomacy at that time. He is carefully putting together every aspect of an education that will place her in the same standing as the most educated young men of her time: reading in English, French, Latin, and Greek. And he succeeds! She is the first fully educated woman in American History or, as one of her biographers calls her “The First Gentlewoman of Her Time.”

As I got further into these letters I wondered why so many authors presented him as such a harsh, unfeeling father, when I didn’t see that at all. I saw a father who had a gifted daughter and wanted her to achieve the greatest heights possible. Why is it so terrible that Burr educates and pushes his daughter the same way John Adams prepared his son, John Quincy Adams, for his role as US President? No one finds it odd that John Quincy began reading Virgil and Terence with a prominent tutor at eleven years old. And I doubt John Adams tolerated scholastic laziness from his son! Burr’s only crime in this is that he chose his daughter to mold as his legacy rather than a son. 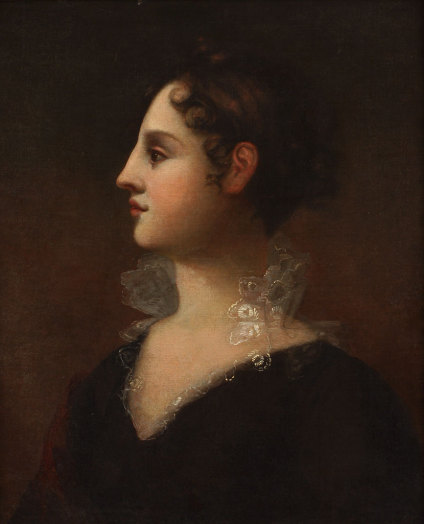 Theodosia married Joseph Alston of Charleston, South Carolina in 1801. The Alstons were one of the largest rice planters in the South, and Theodosia assumed management of their plantation.

She and Alston had one son, Aaron Burr Alston, who died when he was ten years old from an illness. Theodosia was lost later that year when the ship she boarded in Charleston for New York was lost at sea. She was six months short her thirtieth birthday.

I hope you’ll all join me in remembering this exceptional woman. Had she lived we might have recognized the scholastic abilities of women a century earlier. And let’s also give credit to Aaron Burr, who with all of his flaws, was far ahead of his time. He believed that there were some women, like some men, capable of the highest intellectual achievements.

Here are my two favorite books about Theodosia:

Theodosia, The First Gentlewoman of Her Time by Charles Felton Pidgin
Click on the title to download free from Archive.org

And Richard Cote’s wonderful book Theodosia, Portrait of a Prodigy.